Sublime Merge Build 1092, our Git Client, is out now, with a new Contents View, Word Wrap, Interactive Rebase (via the Edit Commit context menu), and GTK3 on Linux. 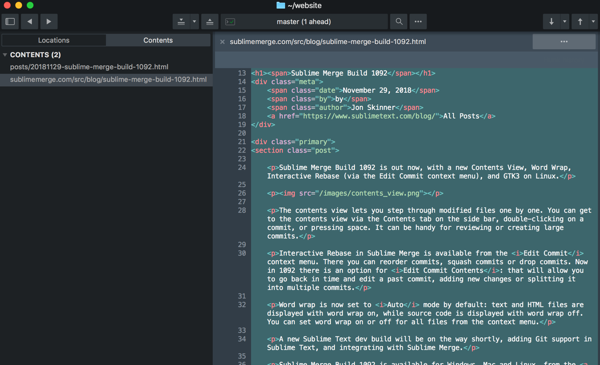 The contents view lets you step through modified files one by one. You can get to the contents view via the Contents tab on the side bar, double-clicking on a commit, or pressing space. It's especially handy for reviewing and creating large commits.

Interactive Rebase in Sublime Merge is available from the Edit Commit context menu. There you can reorder commits, squash commits and drop commits. Now in 1092 there is an option for Edit Commit Contents: that will allow you to go back in time and edit a past commit, adding new changes or splitting it into multiple commits.

A new Sublime Text dev build will be on the way shortly, adding Git support in Sublime Text, and integrating with Sublime Merge.

Sublime Merge Build 1092 is available for Windows, Mac and Linux, from the Download page.